On April 21st at 6:30 pm, we will hear from Dr. Lorenzo Nigro (Sapienza University of Rome) in a talk titled The Phoenicians at the World’s Ends: The Formation of Mediterranean Civilization as seen from the Island of Motya in Sicily. As usual, the lecture will take place in Room 108 Rhode Island Hall, Brown University, with a Q&A and reception to follow. See the abstract below for more information on Dr. Nigro’s talk. We hope to see you for what will be a very interesting lecture! 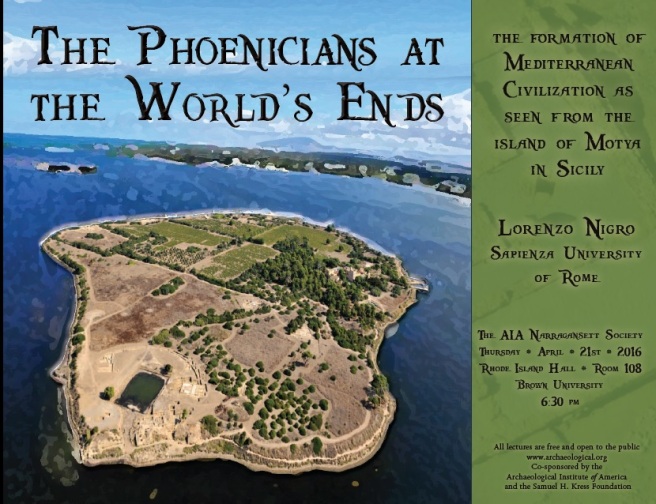 Abstract:
“Fourteen seasons of excavations at Motya (2002-2015) revealed traces of the earliest Levantine and Phoenician habitation of the central Mediterranean, bringing to light the formative phase of Phoenician expansion to the West. The discovery of Building C8 and  a series of wells in the earliest settlement, matched with other recent finds in the Iberian Peninsula (Cadiz), North Africa (Utica, Carthage) and Sardinia (Sulky) have significantly transformed the history of the 2nd and1st millennium BC Mediterranean.

Examining the sea routes across the Mediterranean may help disentangle the intricate roots of our civilization—or suggest that a multicultural/ethnical approach is better for studying the historical scenario of the earliest centuries of the 1st millennium BC, when this enclosed sea became a melting pot for peoples and cultures.”

October 25, 2015October 25, 2015 ~ aianarragansett ~ Leave a comment
Please join us for a talk titled, Tróia (Grândola, Portugal) or the “Portuguese Troy” – A Mystery in the Edge of the Roman World: Space, Architecture, Sculpture, Painting, Mosaics by Filomena Limão of Universidade Nova de Lisboa (Portugal) and in 108 Rhode Island Hall,Brown University campus, on this Thursday, October 29, at 6:30 pm. See below for a description of Dr. Limão’s talk:
The aim of the lecture is to introduce the historical and artistic heritage of the Roman archaeological site of Tróia (in English “Troy”) located in the Southwestern Atlantic coast of Portugal. Tróia is the name of a peninsula on the left bank of the river Sado and despite having been subject of great interest and considerable studies since the sixteenth century CE, much remains to uncover about this place. Surrounded by an attractive natural environment, Tróia, conceivably an island in Antiquity, became an important Roman industrial complex in the first century BCE. Tróia displays noteworthy fish-salting workshops, diversified examples of architecture such as balnea (with remains of mosaics), insulae, diverse funerary monuments and an Early Christian Basilica with beautiful wall paintings. Although not numerous, the sculpture of Tróia (statuary, architectural sculpture and reliefs) is varied showing the relevance of this peripheral place in the intersection of religious (i.e. the Mithras cult and Christianity) and artistic movements of the Roman world. Tróia slowly declined through Late Antiquity (late fifth to early sixth century CE) but its historical and artistic legacy remains as one of the most eye-catching issues for the understanding of Antiquity in Portugal.
We hope to see you in 108 Rhode Island Hall Thursday Oct. 29 at 6:30 pm! As always, we will be live-tweeting this lecture so you can get the highlights from the talk even if you are unable to make it.
March 31, 2015 ~ aianarragansett ~ Leave a comment 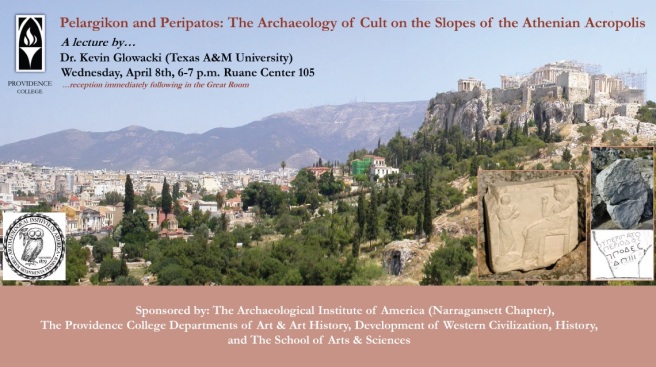 Please join us Wednesday April 8 to hear from Dr. Kevin Glowacki, Texas A&M University, in a lecture titled “Pelargikon and Peripatos: The Archaeology of Cult on the Slopes of the Athenian Acropolis.”

This lecture will begin at 6 pm with a reception to follow after, and will be held in 105 Ruane Center, Providence College (please note that this is not the usual location!). See the map below for more information on the location of the lecture on Providence College campus. 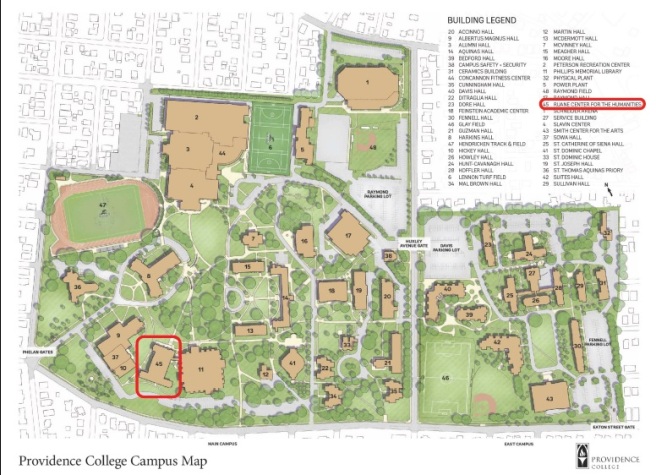 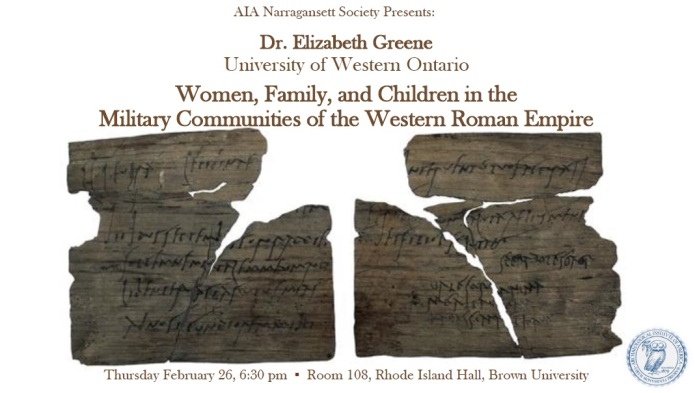 Come join us for an exciting talk by Elizabeth Greene tonight in 108 Rhode Island Hall, Brown University at 6:30 pm. If you are unable to make it, follow us on twitter (@NarragansettAIA) for a livefeed of the lecture. We hope to see you there!

Happy 2015 to all of our members! With the new year comes a new group of talks. We currently have two great lectures lined-up that we are very excited about:

February 26: “Women, Children and Families in the Military Communities of the Western Roman Empire” given by Elizabeth Greene, University of Western Ontario. 6:30 pm in Room 108, Rhode Island Hall, Brown University.

April 8: “Pelargikon and Peripatos:  The Archaeology of Cult on the Slopes of the Athenian Acropolis” given by Kevin Glowacki, Texas A&M University.  6 pm in 105 Ruane Center, Providence College campus **This lecture will be held at Providence College.

Please check here for more updates, including talk abstracts, and our facebook page, which has all of our events activities (and is updated very frequently). 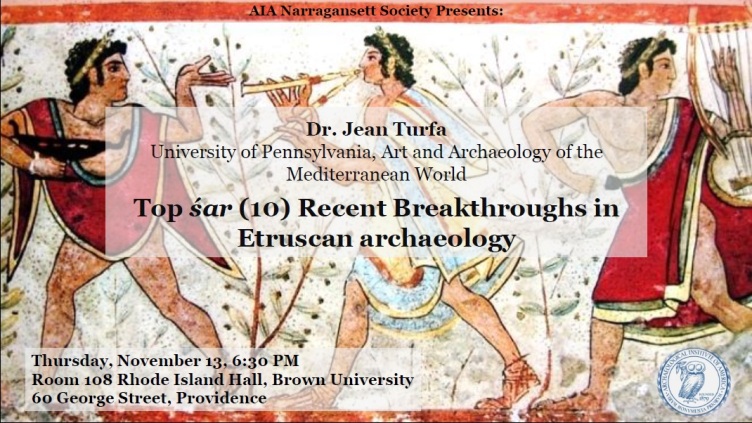 You may not yet know it, but real Etruscans wore plaid, had to accommodate women drivers, built high-speed sailing ships, and availed themselves of quite sophisticated plumbing. You may not know it, but you just might be Etruscan – or be unwittingly using inventions the Etruscans (via Roman culture) gave us, such as the “Latin” alphabet, “Roman” numerals, and gabled wooden houses. Ten recent discoveries show how much our own culture relies on the breakthroughs of Etruscan innovators of the first millennium BC, and just how avant-garde this culture really was.

It’s that time of the year again! As part of our local celebration of Archaeology Day, the AIA Narragansett and the Joukowsky Institute for Archaeology and the Ancient World will be hosting a wide array of events and activities this Saturday, October 25 in Rhode Island Hall, Brown University from 10 am to 2 pm.

Come learn about stratigraphy, Sardinian ceramics, Hellenistic coins, and Egyptian scarabs. You can even help out in the Joukowsky Institute College Hill excavations on the Quiet Green! All ages are welcome, so come by and join us in celebrating Archaeology Day. We hope to see you there!

Not able to make it to tonight’s lecture? Want to know about this talk and other events in more detail? Lucky for you, we live-tweet all of our lectures, seminars, and events, as well as frequently update our activities on facebook! Check out the AIA Narragansett twitter account and facebook page for more information.

Please join us this Thursday, September 25 at 6:30 pm for the Kess Lecture by Yannis Galanakis titled “The Diplomat, the Dealer and the Digger: Writing the History of the Antiquities Trade in 19th Century Greece.”

The lecture will take place in 108 Rhode Island Hall, Brown University, with Q&A and reception to follow. We hope to see you there!

For more information on the lecture, please see: http://www.archaeological.org/events/16366

Our spring 2014 lecture took place last night and a great time was had by all.   Dr. William Parkinson spoke on new discoveries from the Alepotrypa Cave and the surrounding area of the Mani Peninsula in Greece. We had over 30 audience members and a lively round of questions at the end. If you missed the talk, you can view a live-tweeted version on Storify here.