Please join us for our annual lecture on April 7th, 2022 at 6:30 pm EDT on Zoom. The lecture, entitled “A Tale of Two Wells: Birth, Death, and Midwives in ancient Greece,” will be given by Dr. Maria Liston and is part of the AIA’s Matson Lectures in Near Eastern Archaeology and World Archaeological Technology series. The event is free and open to the public, but registration is required. Please click on the following link to register: https://us02web.zoom.us/webinar/register/WN_mKQZyb9vRLybAV6Y4kPHzQ We hope to see you there!

The death of one or more infants would have been a nearly universal part of the lives of women in Ancient Greece. Yet until recently, other than a very few burials of women and infants together, there has been almost no evidence for this. Infant remains are rare in cemeteries of nearly all periods. However, the analyses of two wells in the Athenian Agora and Eretria, Euboia provide some of the first evidence for perinatal death and the decisions that were made regarding infant remains. They offer insight into the role of midwives, the interventions that could take place in difficult births, and the causes of infant death. The informal disposal of infant remains in wells also provides some evidence for the process of acquiring a social identity in Greek society. We cannot know how much agency the mothers of these infants had in the decisions made about them, but these infant remains provide unusually detailed evidence for the practice and outcomes of childbirth, a central event in the lives of ancient Greek women.

Please join us for our annual lecture, given this year by Dr. Amy Barron (Fleming College). The lecture, “The Art of War: Proof or Propaganda,” will take place on Wednesday, April 21st, 2021 at 5:30 pm EDT on Zoom. The lecture is part of the AIA’s Kershaw Lectures in Near East Archaeology series. Please click on the following link to register: https://us02web.zoom.us/webinar/register/WN_C2A5JKY9TiWccMDiGcQNhA The event is free and open to the public. We hope to see you there!

In the first millennium BCE the ancient Assyrians rolled across the Near East leaving fear in their wake.  They celebrated the victories of their mighty armies on the walls of the palaces of Nimrud, Nineveh and Khorsabad.  Scenes of battles, sieges, collection of booty and camp life abound.  But can we trust these illustrations left by the conqueror of their defeat of the conquered?  Can we believe that the images left to us are reflective of the true military history of the period?  Only by pairing the art of the Assyrian palaces with the archaeological finds of their arms and armour can a true picture begin to emerge.  Only by comparing the strengths and weaknesses of the artistic images can we begin to unravel whether they represent proof or propaganda.

Please join us for our annual celebration of International Archaeology Day on Saturday, October 19 from 11am – 3pm to learn about artifacts, archaeological techniques, and lots of fun!

Please join us for our spring lecture by Dr. Elizabeth Matisoo-Smith from the University of Otago. The lecture, “Recent Advances in Understanding the Human Settlement of the Pacific”, will take place at 6:30 pm on Wednesday, February 20th in Rhode Island Hall 108, Brown University. We hope to see you there!

Dr. Matisoo-Smith will also be a keynote speaker at the upcoming conference, State of the Field 2019: The Ancient DNA Revolution in Archaeology. The conference starts Friday, February 22nd at 4 pm in Rhode Island Hall 108. Please check here for details, including the full schedule.

Since the 1980s a general scenario regarding the human settlement of the Pacific has been constructed based on linguistic, archaeological and some basic genetic data. This picture focuses on two major colonization events – an early Pleistocene settlement of Near Oceania (Australia, New Guinea and the Solomon Islands) followed by the later Lapita colonization of Remote Oceania (the islands east of the Solomon Islands). These Lapita colonists are generally seen as the immediate ancestors of the Polynesians and most Micronesians. Mitochondrial DNA and whole genome data, both ancient and modern, obtained initially from commensal animals (those transported by humans during colonisation) and more recently from human populations suggest that things may be slightly more complicated than this traditional two wave theory often presented. In this talk I argue that it may be time to reconsider our ideas about population origins and history particularly of Remote Oceania. I will discuss how the data generated from humans, dogs, rats, chickens and various plants introduced to the Pacific are contributing to our understanding of Pacific settlement history.

Please join us for our annual celebration of International Archaeology Day on Saturday, October 20 from 11am – 3pm to learn about artifacts, archaeological techniques, and lots of fun! 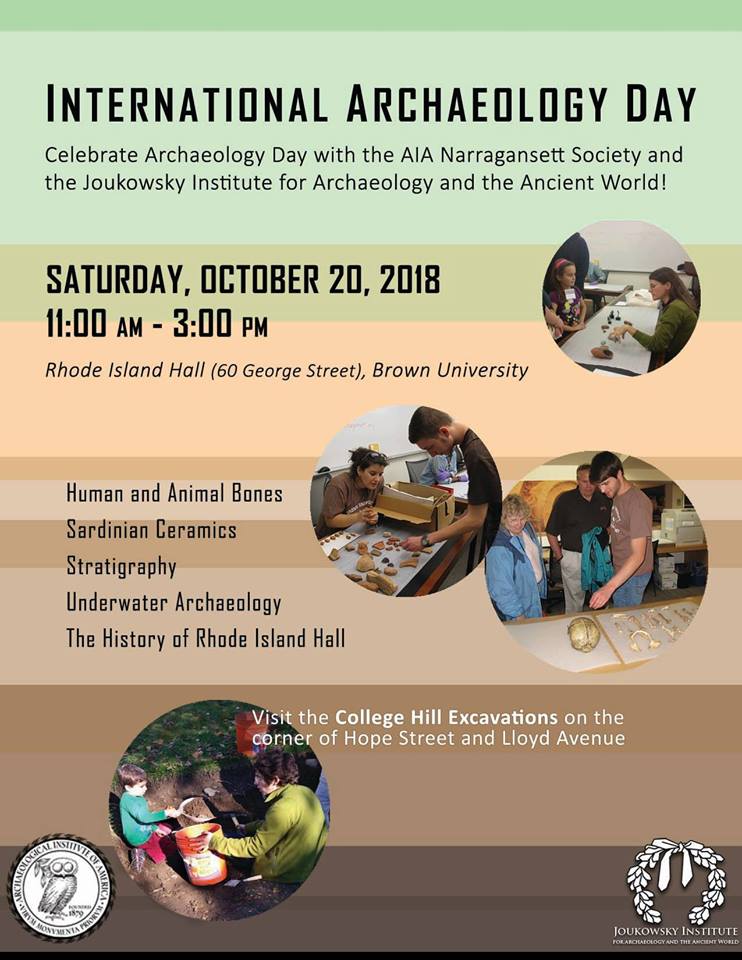 Please join us for our fall lecture by Dr. Kathryn Sampeck from Illinois State University. The lecture, “A Day in the Life of a Sixteenth-Century Ani-Yunwiya (Cherokee) Village”, will take place at 6:30 on Wednesday, October 3rd in Rhode Island Hall 108, Brown University.  This lecture is part of AIA’s Nadzia Borowski Lecture series. We hope to see you there!

What was daily life like for Cherokees just at the moment when groups of people from across the Atlantic—Spaniards and Africans—started to become part of their world? A tour of one settlement, Cowee, lets audience members understand what Cherokee  homes, communities, and networks of communities were like and the kinds of activities  that were important to peoples’ lives. Each example is based on archaeologically-recovered information as well as community history and knowledge. This visit shows what an important historical moment this time was for Cherokees and colonists alike, why these settlements are places of enduring importance, and how Cherokee peoples were crucial in early colonial encounters and subsequent political and economic developments.

Please join us for our spring lecture by Dr. Kieran O’Conor from the National University of Ireland Galway. The lecture, “The Deserted Anglo-Norman Town and Castle of Rindoon, Co. Roscommon, Ireland”, will take place at 6:30 on Thursday, March 15th in Rhode Island Hall 108, Brown University. We hope to see you there!

The deserted Anglo-Norman royal town and castle of Rindoon lies on a peninsula jutting out into Lough Ree – one of the great lakes of the Shannon River system that runs through central Ireland. It is regarded as one of the best examples of a deserted medieval town in the British Isles, as it only existed for just over a hundred years before its mainly English inhabitants deserted it in the early 14th century. This lecture, drawing on a recent multi-disciplinary study that included field survey, geophysics and an analysis of the surviving historical sources, will discuss each of the various elements that made up the town, particularly its multi-phase castle, and will argue that elements of what certain British archaeologists have called ‘an elite landscape’ occur at Rindoon. Furthermore, it is clear that this Anglo-Norman frontier fortress and town, trading with but also under military pressure from local Irish (Gaelic Irish) lords, was not founded on a green-field site in the early 13th century. Evidence from field survey, stray finds, geophysics, the available historical sources and aerial photography all suggest that there was an important pre-Norman settlement here. This is a fascinating complex that is now part of the rural tourism product offered by Roscommon County Council and attract more than 9,000 visitors a year. The lecture also offers insights into the relationship between the Anglo-Normans / English and the local Gaelic Irish during the 13th and early 14th centuries. Lastly, the talk will indicate how in times of recession, a relatively small research budget can achieve measurable academic results than can also be used by the local community for cultural tourism purposes. 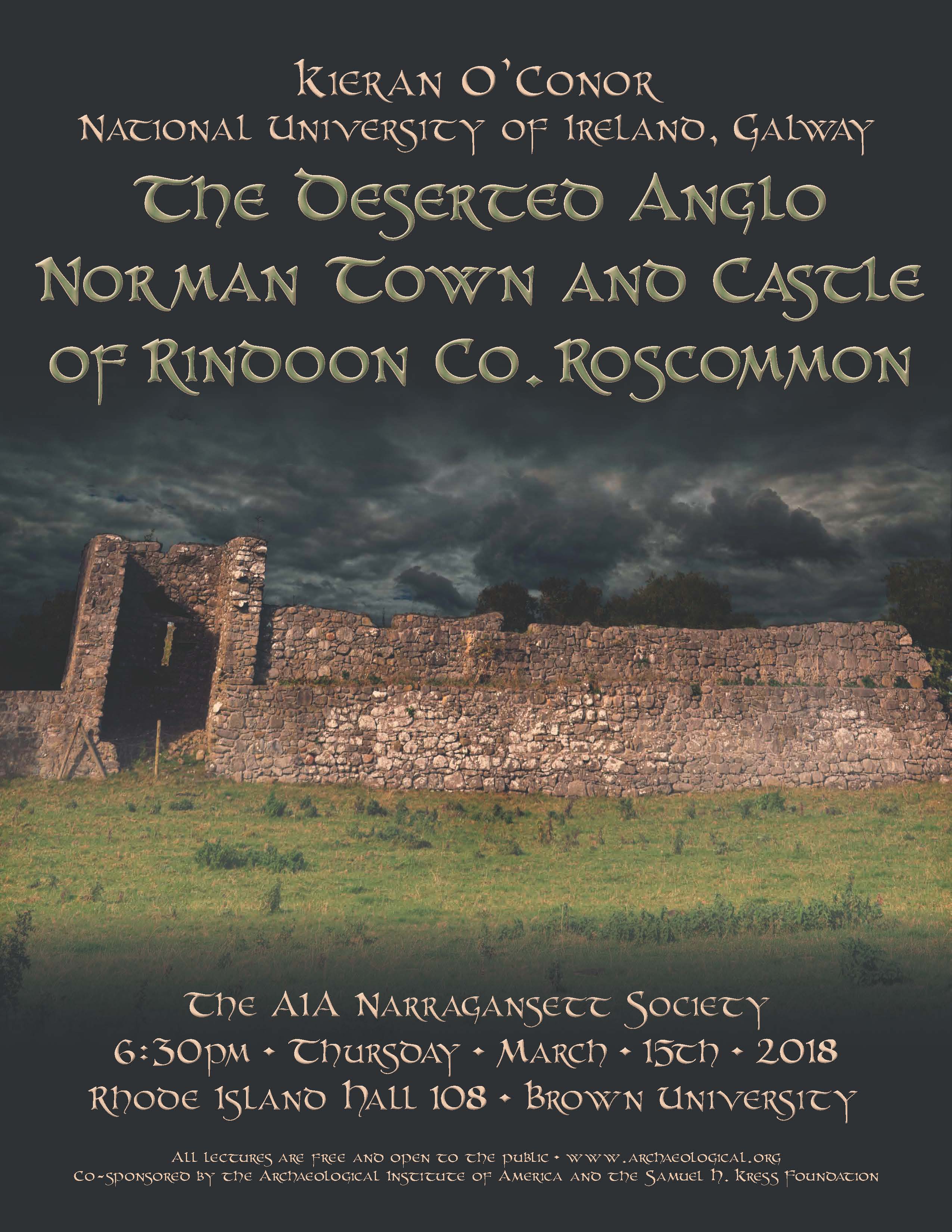 Please join us for our fall lecture by Dr. Scott MacEachern (Bowdoin College), titled “African crossroads: the rise of states around Lake Chad”. See the end of this post for the lecture abstract. The lecture will take place on October 26th at 6:30 pm in room 108 in Rhode Island Hall on Brown University campus. We hope to see you there!

Lake Chad sits at a crossroads in Africa, where trans-Saharan trade routes open up to the savannas and forests south of the desert, and astride the immense grasslands that extend west-to- east from the Atlantic to the Nile. It is no surprise that this region has been a zone of encounter between very different groups of people throughout prehistory, and that its political history is enomously complex. Archaeological research in the region through the last 50 years has provided a great deal of evidence for that complexity: large defended communities contemporary with Iron Age oppida in Europe; the early introduction of horses, used in warfare and predatory slave-raiding; and the development of defended mountain zones that are enormously complicated culturally and linguistically. Today, the lands around Lake Chad are best known in the West for the activities of the Boko Haram terrorist organization. In this lecture, I will try to provide an alternative view of an endlessly complex and fascinating part of the world.

Come visit the Joukowsky Institute for Archaeology and the Ancient World in Rhode Island Hall. Faculty and students will be on hand to tour you through the building, as well as to show you artifacts and images, both from some of our current fieldwork (in the Caribbean, Egypt, Italy, Jordan, Turkey, and Rhode Island) and from the Institute’s collections. Located at Joukowsky Institute for Archaeology, Rhode Island Hall, 60 George Street.

Watch Brown undergraduates digging (yes, really digging!). This year, as part of ongoing work on Brown’s campus and in the surrounding neighborhoods of College Hill, students will be excavating at the nearby Moses Brown school. Stop by (with your family or on your own) any time between 11 am and 2 pm to see what we’re up to or try your hand at digging. All are welcome!
Moses Brown School, 250 Lloyd Avenue (Excavation at the corner of Hope Street and Lloyd Avenue)

Please join us for our spring lecture, given by Dr. Stephen Batiuk (University of Toronto).  He will present a talk titled “The ‘Kingdom of Idols’: Recent Investigations at Tell Tayinat (Ancient Kunulua, Biblical Calno) in Southeastern Turkey.” See the end of this post for a lecture abstract.

The interplay between the Hebrew Bible and the archaeological record has all too often been a contentious affair, greatly dependent on how one understands its compositional history, as well as the cultural and geopolitical context in which it was written. This talk presents the latest results of the University of Toronto’s excavations at Tell Tayinat, ancient Kunulua (Biblical Calno), located in the North Orontes Valley in the southeastern province of Hatay in modern day Turkey. The lecture will focus on the Iron II-III levels (9th to 7thCentury) at the site, which record the changing fortunes of a Neo-Hittite Kingdom perched on the edge of the Assyrian Empire, and will explore how archaeological evidence from the Northern Levantine Royal city can shed light on the local history of a region, while also providing insight into the cultural environment in which the Biblical texts were written.